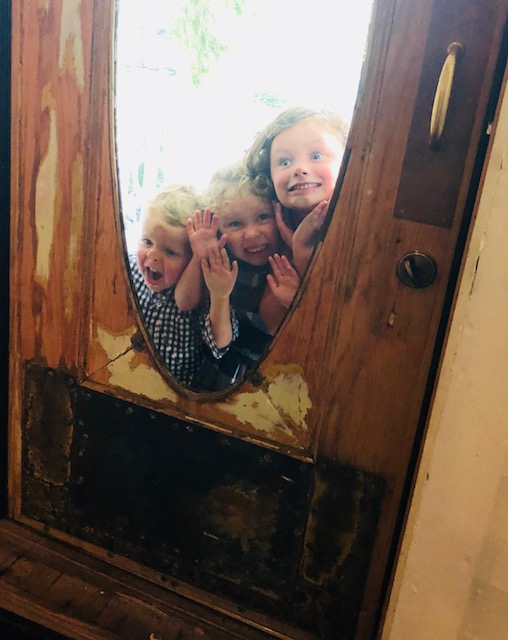 The other morning, it was a Monday actually, I came home from camp drop-off, slung my bowling ball of a bag on the kitchen counter and took in a big, happy sigh of silence. After a long, fun, messy, chaotic weekend of friends and tots and water and play– reality, while a massive chore list ahead, was feeling pretty awesome in this quiet house. I kick-started some laundry, rocked the dishes and headed upstairs to clean the kiddos turf. By the time I made it downstairs, I started to think it was just a little too quiet—except for of course the sound of my husband’s loose change rattling in the dryer (eye roll) ;)  I snagged the TV remote, hit the power button and continued to buzz around the house. Walking through the room and picking up only bits and pieces of what was on the television, I did take notice—this was looking like a pretty main news headline. Wait, is that Mr. Rogers they are talking about? WTF. I swear. Is this another sex scandal? Is nowhere safe? And isn’t he, sorry but, dead? Maybe we should just like let him rest.

So, cut tooooo. I couldn’t have been more wrong. That was me ASSuming. And you know what “they” say about assuming. Something about you being an ass and me being an ass. But you’re pardoned, because I was the only ass in this situation. Turns out I was way out of the news loop, and had missed that there is a film coming out about the powerful and beautiful impact (Mr.) Fred Rogers had on a particular reporter while he was interviewing Rogers for a magazine article in 1998. The director, Mareille Heller, when explaining the premise of the film, is careful to point out that this isn’t a biopic film (dramatization of a historically-based person), but more about this reporter’s entire life changing upon his interaction/s with Mr. Rogers. I haven’t seen the film, but think this quote is all the marketing I need:

“It’s a story of our times, a story about kindness and family connection and trying to tap into our better self. God knows we need that right now!”

Heller adds that throughout their research for the movie, they lost count of those that came forward stating that Mr. Rogers had changed their life. What an incredible tribute.

Honestly, as a kid (and a parent), Mr. Roger’s show wasn’t one that I gravitated toward too much. It was a little slow for my spastic brain, but that aside, and knowing what a cool man he was on the sidelines, trumps all. I’ll be seeing it for sure. The world can be scary, especially raising these innocent little humans to be resilient enough for it. I need all the wisdom to which I’m entitled.

As a parent of a daughter 6 years of age, I’m acutely (and regularly) taking note of the fragility of one’s confidence and self-esteem. There are already complex social dilemmas coming home with us (oh lawd), and while I don’t know if you are ever completely prepared for what’s to come, being armed with some nuclear strength tools can’t hurt. Thus I’ve turned into a bit of a “lesson sponge” grasping at any quenching wise words that come my way.

A Virginia Tech professor who was on campus during their tragic shooting in 2007, was recently speaking on public radio about indifference. Her message was so simple and poignant I wanted to pull the car over and soak it in. Her sense is that indifference and the violence that can come along with it, is really just a result of “not knowing”. If we get to know each other, we can always find something relatable, or at the very least, learn something. Such a beautiful concept; (for the most part) the more you get to know about someone, humanity will follow.

This is something I would love to etch into my children’s hearts. Be open and accepting. If someone isn’t as kind back, there might be something else at play—and perhaps they could use a friend (even more). Get to know the child that sits by themselves. Maybe you have something in common. Maybe they need someone to listen. You can never have enough friends—or, in the words of Fred Rogers: never have enough kind neighbors.

This all reminded me of a little “friendship” I “recovered” a handful of years ago. Once every two weeks or so I would go into the same post office on my lunch break to mail a package. Same chick was working, and it was like clock-work. I stepped in those doors, and even through a sea of other customers waiting in the line, she would glare at me. I would glare at her. (Side note: we had this oooooone little issue once when she wouldn’t let me use my debit card for a pack of stamps and it just never really jived after that. In fairness, she was doing her job, but rudely, and I was just – well annoyed.) SO…this one day, there wasn’t anyone else in the office. It was just me. And it was just her. Pin drop. Cue the Old Western whistle noise right before a gun draw. Tumbleweeds rolling.  I just walked right up, careful not to walk directly to her register because, as you know, the first rule of Post Office is that you wait to be called: “neeext guuuest”. I waited. She watched. She knew she was in control and I was letting her own it. She called me over and just started typing up the label. I noticed a little photograph of a small white puppy taped to the back panel of her cube area. “What a cute puppy that is”, I said with a kind of half-scared smile (it really was cute.). She stopped what she was doing and looked over at the picture and then up at me with a smile and said, “Oh yes….that one’s a mess.”  We made eye contact while smiling. The respect was forging! We snickered and talked about it lightly as I looked through my wallet to make payment for the boxes. As she busily went back to typing, she softy mumbled to me, “girl, you know we got those Johnny Cash stamps you like back in stock. You want some?”  I looked up with a coy smile like she had just let me in on the hottest tip of the century and said “Giiiirl, you know I do.” Friendship secured.

This isn’t the fairytale of besties or anything, just a gentle lesson that sometimes the “darkness” in the world is simply a result of a lack of knowledge or the effort to get to know what others believe in or have passion about. Also much like assuming someone is rude when really they are just kind of shy. (Repeat lesson: don’t assume.) Right or wrong, boring or interesting, annoying or enlightening—have a little patience with what you don’t know about humans and their situation.

During less comfortable times, whether making a new friend, dealing with one that is unkind, or even walking your child through the rocky terrain of the world, I think we can all lean on the openness and positivity of Mr. Rogers. As my friend CCW so eloquently quoted Mr. Rogers when paying a beautiful tribute to our local hospital and the amazingly humble and competent cancer team that treated her dear father in his final days (love you CCW and MB), Mr. Rogers recalled his mother telling him during times of adversity or sadness, “Look for the helpers. You will always find people who are helping.”  This is something that we can take comfort in and apply to almost any situation. We should be those helpers when we can. Help someone navigate a tough time, help a friend make a friend, help in the time of crisis. Help the world see a full glass.

As America’s birthday is headed our way, let us remember what We the People are meant to be about. Hand over heart to all of you peeps.

And thank you for stopping by.