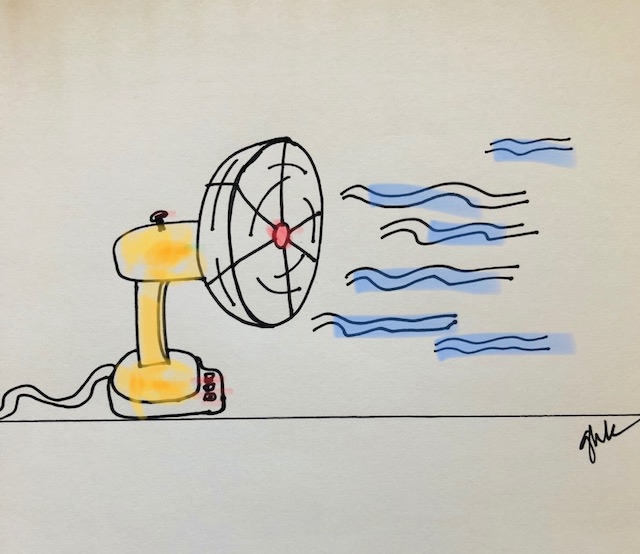 As temperatures soar high in the hellish temps this week, I’m reminded of a very fond and special sizzling summer memory.

Perched in my cubicle at Arnold Advertising on the 11th floor watching the clock one afternoon, I was pressed for time to finalize media reports before EOD. Suddenly, the lights blinked. On, then off, then on again.  Cube neighbors, slightly zoned in work mode-  some in headphones, looking around at each other in puzzlement (tis a word; I checked). Then— a loud boom and the lights went out. For good, for that day.

This was August 2003. And we were experiencing the Blackout in New York City. Being that this was two years after the horrific attacks of 9-11, and no communication was available (no cell service or internet) and sirens blaring to alert us to exit the building, there was panic in the air. Most of us, young, hipster-esque folk, while swiftly finding the stairs for our long journey down, cracked gentle jokes, yet all making long, vulnerable eye contact seeking answers from one another.

I remember thinking we were all about to be sitting ducks on the street once/if we exited. Though still a sense of excitement in the unknown. I felt safe — enough. When our pack arrived downstairs after a dizzying downhill hike of eleven spiraling floors of staircases, officers greeted us and other swarms of folks on the street informing us of the “blackout” which was quickly making its way through the northeast. The officer mentioned something to the effect of the “over use of power (and maybe some indication of human errorJ)”. Okay- so no terrorist attack? The power is just out? And we get to go home? This could be cool. Pun unintended.

Those that lived in the Triborough and Brooklyn areas felt the need to get toward home, as there were still some ominous “bugs” in the air. Those of us who lived close by decided to get some beers to regroup and find our homies.

The city was still bustling outside, yet all places remaining open had a soft silence to them. We jaunted to one of our happy hour spots. Doors slung open for any blessings of a breeze. The place was dark except for peeks of natural light and had a handful of patrons parked in scattered barstools casually discussing the situation with the one dedicated bartender.

“All cash folks and closing up in a few to head over the bridge”, the bartender announced.

Oh snap. Didn’t think about that…..ALL CASH. No operating credit card machines. Anywhere. Who knew how long this “blackout” would be. How much cash do I have on hand? Generally speaking, that would be well, none. I mean, I didn’t have much in the ol’ bank account back in those days anyway, thus cash was usually a joke. I had a few shillings for provisions that day, so had a beer and said so long to work pals and headed home to my hood.

The sweet bodega fella at the top of my street in the West Village was giving away waters and charging pennies for food soon to spoil.  I purchased a few rations in a panic and we wished each other well and to “keep cool”. It was mugggg-gy that day.

We had a solid neighborhood crew and—luckily, a go-to watering hole. The Waverly Inn, back in those days, was understated and a guarantee for finding one of your pals—they were there if they weren’t home after a certain time of night. I used to say it was our Cheers.  Unlike its swank ways nowadays, then it was an untouchably cool; an undiscovered secret jewel nestled on one of the most charming corners in all of Manhattan. Small, friendly and their gang loved our gang. Always playing the hits and keeping our drinks coming.

The Waverly was on my way home from work, and that afternoon I saw our bartender buddy Billy laboring through every bag of ice he could score, filling coolers with drinks in preparation for a night– or nights– ahead. He knew we were bringing it that night. I told him we would be seeing him soon. Onward I walked, while noticing the sun starting to dip. The weight of reality was starting to settle in. It’s about to get dark. Real dark. And it did.

When I got home my roommates were opening the windows and in the process of pitching fridge items. They were way more organized and adult-like than I.  A few of us made our way to a friend’s apartment bringing candles, headlamps and food that could be cooked by gas. We ended up making a very impressive spaghetti dinner. Very candle-lit, very dramatic and very fun. Then it was our time to check on Billy at the Waverly. Stepping foot out of that warm apartment felt like a foggy dream. Surreal beyond definition. It was as if every neighbor had been scooped up and poured onto the streets. Too hot to stay cooped up, no doubt. There were strangers making friends on sidewalks, folks forming stoop-front bands with their instruments (and lots of home-made bongos) all lit by the union of light by the communal forces of lanterns, flashlights and candles. It was the most fascinating and invigorating feeling. This all organically formed by those, while different, feeling the same inside— unsure, relief?, vulnerable, excited and at the same time, just a little uncomfortable. It was empowering to see everyone take hands and make the most of a confusing situation. The sense of fear and unknown still lurking—how will we let our parents know we are safe? Are we safe? Is this just – well, a “blackout”?

I couldn’t tell you how late that neighborhood—and that city– stayed awake that night. I’m pretty sure when the sun started to peep up, it freaked us out, so that broke up the party. We had grown too accustomed to the darkness, I suppose; like little vamps ;)

The blackout went on for another day or so. It started to get a little old when you realized you were just going to be more uncomfortable and whiney—- even when you reminded yourself that some people in the world live like this always. So then you were just mad at yourself for being whiney.

So I’ve let this be my reminder that it’s good to have your feathers ruffled from time to time. Stay cautious, yet open and creative in confusing times. You never know, it might just be a good story to tell later.