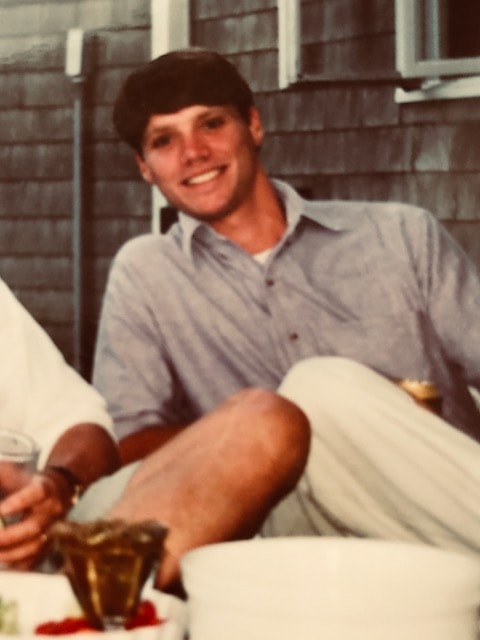 In memory of my brother Lawson and the anniversary of his passing, I thought I would give a little shout out post to my bro. In many ways, he is the reason this little writing vessel, some might call a blog, took sail.

If you have ever lost anyone close to you, you will relate when I attempt to describe grief as an ocean of emotion. What I found in losing my brother was that there was this club out there. It’s not a club that you necessarily want to be a part of, but there is a welcoming hug of experienced people who have felt your pain.  (Losing older family members and dear friends has been a difficult, yet different kind of pain.)  I have been in this proverbial “grief club” now for 5 years. I have learned so much– about myself, the power of family, the strength of my parents, the kindness of others- and as lame as it sounds, the importance of taking in the beauty of the little things all around. Each day seriously is a gift. It’s a bummer, to put it lightly, that Louie (Lawson) had to go for me to learn these things. Maybe I would have been shown them in another way down the road, but I thank him and the outstanding man he was for showing me the way on gifts like these. There is a new lens on my view of life.

These days the waves of emotion still come rolling in, though they are much different than they were in the beginning. They are deeper, yet more manageable. The fact that he is gone is now more believable. The new normal, sadly. His absence hurts in a more glaring, helpless way—though I guess now I have accepted it for what it is. And as sad as it is.

I laugh to myself remembering how I wasn’t believing, for a long while, that he was really, truly gone from this planet. Like, refused to believe it. I came up with scenarios for where he really might be hiding out. The reason I could allow myself this belief is that even though he was cremated, I never went to see him at the funeral home (?) before the cremation. I didn’t want to remember him that way. I don’t regret that decision— especially now that I can still smile and imagine that maaaybe it never happened and he’s just chilling on a beach in Chile somewhere in some kind of witness protection program assisting some cool village peeps in maintaining a robust farming industry. I like to think that way, at least. Either way, I know I will see him again.

Dead or alive, here or there— I feel comforted in knowing that his spirit is around his daughter, my parents, me, my family—especially my kiddos. They are like the messengers of all messengers in the things they say and see; “signs from above”. The spirit world is very real to me— and it’s a beautiful concept (for me to believe in). If nothing else, it’s the most unique kind of comfort when you miss someone so much it hurts.

Shortly after Lawson died, my sweet cousin and family helped me get in touch with a spiritual advisor/medium/psychic– however you wanna roll the dice. The conversation that I had with her helped me in a profound way in a time when I was feeling quite lost and grief counseling wasn’t doing the trick. I’m sure I’ve mentioned this before. I’m not one to attempt convincing anyone to jump on that belief train—mostly because I think we are all connected –or not connected– to our past lives/spirits in such individual ways. I’m a believer for too many reasons; however, it should be noted that no one has ever accused me of being totally normal or sane–  so there’s that.

I haven’t spoken with the medium in a while—I suppose that is a sign of progress. But a few years ago during one of our chats, she asked me if I was writing. I asked her what she meant….like a journal? She said I needed to be writing. Blogging, actually.  Putting my thoughts out there….  Well, I’m sure you are thinking what I was thinking– when you are paying someone a pretty penny by the hour, it is mooooost likely they are gonna tell you what you want to hear….duh. I didn’t think much of it, but she brought it up the next time and the next time. She said, “I won’t bring it up again, but I’ve gotten the message too many times that your brother always thought you were witty.”  Boom.  Maybe her spiritual connection is bogus, but she’s for sure psychic enough to know what buttons to press with me– anyone thinking I’m even mildly amusing. And basically anything my brother thinks is what I have wanted to think…since birth.

As a side note, I always thought he was the most hilarious guy too. Once in college we were traveling from Germany to meet family (and my parents) in Italy.  We met these two (American) girls outside the train station. They were kind of on our travel route. I thought one was so pretty and all dolled up and she seemed all giggly and into Louie. Once we boarded, I told him he should go talk to her. He was like, “I dunno….I’m not all into that “high-maintenance” kind of chick”….Well I thought that was the funniest, coolest description ever. I had never heard of someone described as “high maintenance”  before then– and it was just perfection. Obviously, he didn’t coin it, but I still like to think he did. And even though I thought all of those girl’s bags were cool and her makeup was so sparkly—I was like – “Yeah, me too. That girl looks annoying.”   Cut to—fifteen minutes later he and I got into some fight with each other because the only thing to eat on the train was this old mayo-ey sandwich from the dining car. I said I wasn’t going to eat it. Lawson was like- you have to eat it. I said it was disgusting and no way. He tried to shove it in my face and then we started socking each other in the arms and legs for a few rounds. It was a very Rusty and Audrey Griswold moment. —–and I wouldn’t trade it for the world.

(Obviously he had a million original entertaining “Lawson-ese-isms”(not borrowed expressions)—- just too many to note at the moment.)

So back to my little psychic convo—after some time and consulting with friends, I pulled the trigger this past summer and published myself a little baby blog. So, thank you for reading. You never know what you are going to get, so I appreciate your support and patience in this endeavor. Seriously. Means more than you know.

My nose has gotten a little pink and my eyes are a little “glisteny” as I wrap this up one day before his passing anniversary. I’ll be pouring one out for Lawson Hayes III this weekend. Here’s to keeping you and yours anything but high-maintenance. ;)