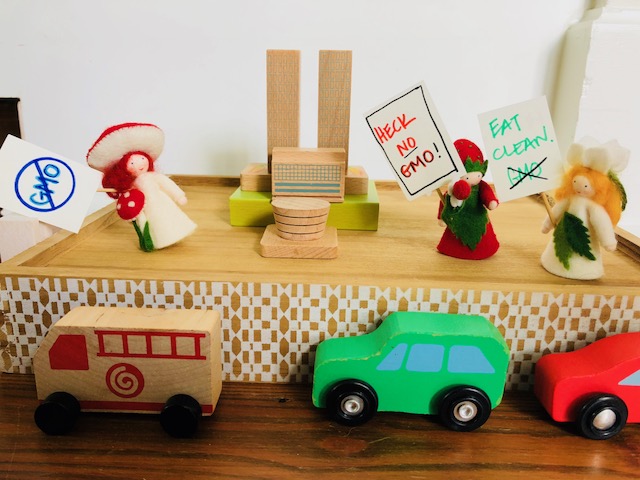 If you’re a label reader or careful food shopper you may have noticed the increase in GMO (or Non-GMO) labeling that is present on a lot more of our groceries these days. Though, if you ask me,  it won’t be enough labeling until it’s all labeled.

I’ll try not to blast too much about how yuck the Genetically Modified food world is, as you can find extensive information on that and not even have to look too far….I just hope to shed some light on what GM is and how you can avoid.

GM seeds for crops were developed in the 80s and GM food was approved for supermarket shelves in the early 90s. Essentially they were developed to help the big crops used in everything (soy, wheat, corn, sugar etc.) sustain elements such as harsh climates and insect infestation (and with hopes of longer preservation time to make it to more areas and keep up with the growing population). So even though the (evil) company Monsanto (who modifies the seeds and has a patent on the very toxic weed killer- Round up) claimed the seeds would produce crops where less insect repellent could be used, that’s not the case. These “super seeds” began producing “super (killer) weeds” which needed to be treated with an even stronger pesticide. So on top of more toxic chemicals, the food is ALSO not in a natural state, as it is modified with injections of other genes from other sources.

It’s pretty sad and frustrating that the US isn’t on board with banning genetic modification for food, as many are countries are. Studies saying GM wasn’t “too harmful” were provided to the FDA, leading the US to allow the use of it. Turns out those studies were provided *and* funded by – you guessed it – the Monsanto company. (Ummm hellllllooo- Any one ever seen Erin Brockovich? When the medical records were provided by doctors hired by the toxic chemical company?) AND, side note – Monsanto doesn’t even serve their (GD;) GM food in their company cafeteria…All I can picture is the scene from Erin Brockovich where Julia Roberts pours the glass of water for the corporate lawyer and shoves it across the table saying to her, “We brought this water fresh in from Hinkley just for you.”  (Ahhh, no thanks.)… So badass.

GM crops are supposed to give food a more appealing look and texture (and longevity). What is this the Truman Show? Are we on a movie set? This is the fuel that our bodies are supposed to thrive on. Last time I checked, my body was not yearning for a “frost free synthetic gene” organism. I don’t care that my apple turns brown if it sits out for a few hours after its been cut. That’s nature. Big business wants to preserve sliced apples in a happy meal to provide that “healthy option”? We’re gonna go ahead and call our little happy meal splurge a nutritional “loss” all on its own. I’ll pass on your supersonic apples.

I’ve quoted this before from a luncheon with Cancer survivor Fran Drescher who said, “…these big companies don’t want to kill you, they just want to sell you. Buuuut if they kill you in the process…..(throws her arms up with shoulder shrug…..) welllllll (insert her infamous laugh)…She was referring to the link between corporate greed for profit and parabens in beauty products– it’s all applicable.

The good news is that our bodies work pretty well on their own detoxifying themselves. Unfortunately, these new modified toxins are making our bods work extra hard in a non-natural way on non-natural nutrients. Cave men didn’t have to worry about glyphosate in their food! And the cave “girls” weren’t “developing” at lightening speed back then either. Point is—(enough with the  Debbie Downer!),  we just gotta help our cute little bodies ward off these fierce (and prevalent!) radicals. Just eating a little cleaner can add countless bennies to how you think and feel. But you already knew that, these are just some easy ways to do it.

*Look for certified organic AND Non-GMO verified project labels. (I used to only look for organic, Now (I think that I think :)) non GMO is more important.)

*Avoid organic labeled produce not from the US. (Buy local if you can!). The US approves chemical preservation on organically grown produce once it arrives to the US.  (ugh. Come on FDA, that is ridiculous!)

*Non-GMO Project Shopping Guide App— this is a quick and easy scan app if you’re not sure or a product isn’t labeled.

(I couldn’t bear being more negative on this beautiful Monday morning by telling all of the bummer effects of GM and what our government allows versus other countries, but if you’re feeling extra feisty  this petition is a good one for the cause.)

We are what we eat–sometimes I’m a happy meal! And when I’m not, I try to be a little kinder to the systems :)