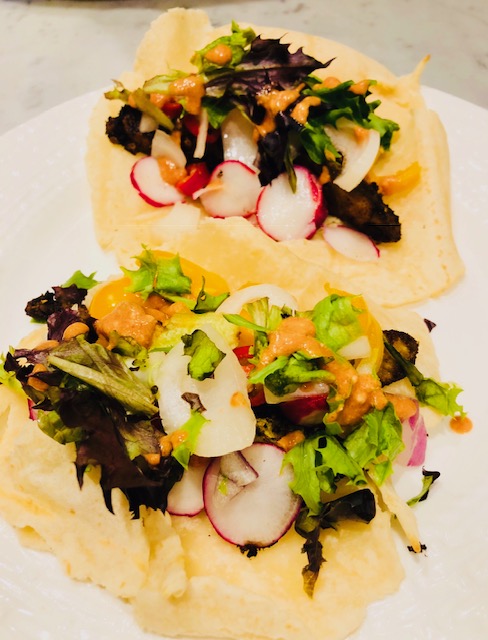 It’s football season. My very, very favorite. Bringing out the woolies, fire wood and undenying optimism and hope that arrives with the crisp, fall, football air. And, side note, who doesn’t love the grub of a tailgate spread?

(Off track: To my observance, taco bars aren’t a popular feature at a tailgate, but maybe they should be.  While *this* idea doesn’t apply to “Meatless Monday”, you could scour up some pre-made bbq, tote some tortillas, coleslaw and/or a lettuce/radish/onion mixture and be a hit. …Next time.)

Now back to our regularly scheduled meatless ways of the day. Featured below are a few PETA friendly, easy creations:

Remove avocado “meat” with a spoon in as big of pieces as possible. (Chop in “big” bite size pieces if necessary.)

2: almond or cashew milk and one egg mixed (or skip egg?)

Heat (grapeseed?) oil in a skillet until hot. Fry avocado a few pieces at a time until golden on both sides. Place pieces on paper towel to drain excess oil. Then place onto warm tortilla shell.

You won’t miss the meat on this one. 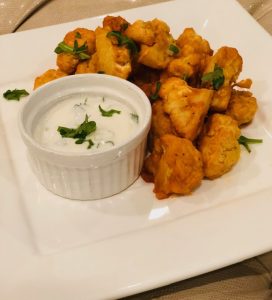 This one takes me back to crisp, fall New York City. We were all living well beyond our means, but food wasn’t the reason. This due to many wallet-friendly, waistline-busting temptations such as the wing meal deal at one of our favorite haunts. Maybe we were drinking too many fancy beers along with our 15 cent chicken wings. It was all rapidly flowing in those days. Fall Saturdays and Sundays you could find our crew on the Upper East Side in the back room of a bar in front of a small, mounted TV sitting upon carpet-lined, built-in benches reminding me of those you may scout at a jank skating rink. (Can any of you cronies remember the name of that place? I think they took checks? ;) Was it Mad River?) This was also the time when many of us, male and female, were gently experimenting with the trendy Atkins diet. And to our detriment (or enjoyment?), Chicken Wings were passing with flying colors. I get a little queasy thinking of any meat in a bucket these days, and this is no exception.

Thus, as an occasional meat eater these days, the recipe below has been one of my football season staple replacements. I’m still perfecting it. They are darn good as they are, though I recommend not serving them directly neighboring that of a “real” chicken wing. Maybe after I tweak a little, one day they will be the dominate choice! Cauliflower is a superfood, so at least they have that going for em’.

This recipe is inspired by my favorite health guru hero, and dear sister-cousin, (xo Mo K!) who whipped these little babies up years ago. (Mo- Any tips on perfecting these?)

Preheat oven to 400. Line a baking sheet with parchment paper.

Coat cauli pieces with the flour mixture. Place on parchment paper lined baking sheet. Bake for 15 minutes or until golden on both sides (flipping pieces mid-way if desired).

Here’s to finding comfort in your kitchen.