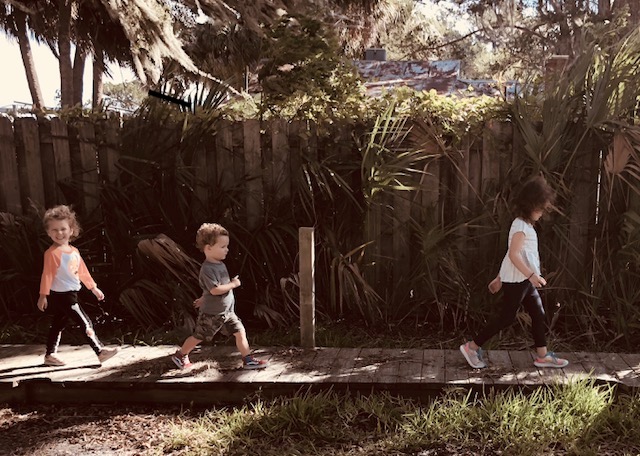 The other morning, I planned a downtown extravaganza for my three littles and me. I’ve referred before to these dreams we have as parents of adventures we long to do with our children. You know those outings you envision with your kiddos as being fun, light, exciting, cultural and enlightening? I would say…just enlightening at this point. As in what was I thinking? Their interests lie heavily in ransacking those jank tourist shops to beef up their count of “squishy” toys and obnoxious fluorescent lovies, constantly arguing my “you may get one thing” rule. (Also not contributing were that the museum was closed, the weather was thick and muggy, lunch was chaotic, and my oldest dropped her new unicorn-poop putty in a puddle.) These excursions without fail seem to turn quickly into mood swings and pouting fests, which we all know can be quite contagious.

There were some memorable highlights. Once my husband came to join, moods regulated, as everyone knows adding an even bigger kid to the mix is fun for all (juuuuuuust kidding, rdk;).

As we were walking to meet my husband we were stopped by the fierce crosswalk hand. Baby boy was in meltdown mode and older girls weren’t interested in listening. Whereas I’m normally freakish when crossing the street, demanding that two clutch my hands and one grab firmly to whatever skirt or garment I’m wearing, I was feeling desperate when the crosswalk light finally welcomed us. I took a quick, safety glance around for potential moving traffic; then commanded, “everybody run!”.  A tornado of youngsters blew through the onslaught of pedestrian traffic. Their moods were lifted. That freedom and boost of independence seemed to do the trick. It was for sure a teachable lesson to me. Kids thrive on adventure and being independent. I can ease up a little and trust them to be and do the right thing.  **However not to be overlooked were the dagger eyes shooting my way from the oncoming couple crossing with their one cute kiddo that appeared to be tethered by a leash to both parents. (different strokes, different folks.)

Last week I was chatting with a friend (LRT!) who was casually making mentions of a parenting book she was into. I was clinging to her every tidbit, as I had been feeling a little parent-fail over the last few weeks (and this moon phase wasn’t helping). What caught my attention was the idea that children thrive most from independence (huh, I even had a living, recent example* see above ;). This makes sense, though I am hugely guilty of actively parenting from a place of fear; thus attempting to control…well, everything (what they’re eating, what plastic they are not drinking out of, what they are watching, what they are playing, who, what, when , where….). As we know we really can’t control anything, but that’s so much easier said than done. I ran to this book, How to Raise an Adult, after our lunch and began soaking it in.

The author penned this insightful book out of necessity. She knew she was on the path of becoming a helicopter parent, though didn’t know how to get out of the process. She needed a strategy, though no one was offering it to her. Early on she mentions attending a speaking engagement for parents where afterwards she was approached by a mother looking very lost and distant asking her “when did parenting get so stressful?”, and another mother joining in to ask “do you know how many parents are now medicated for anxiety?”. She goes on to say that as parents today we are frazzled and worried—often focusing on the wrong worries, for one thing.

She asks, “when did we go from preparing our children for the world, to protecting them from it?”

We need to have the courage to step away from what has consumed us (our children failing from time to time— that’s how they learn!) and stop the over-parenting; allow them to grow, explore and live. Otherwise, they may never learn how to adapt and problem solve when it’s crucial.

Independence builds confidence. Coddling creates problems. So maybe I won’t cut up my children’s strawberries anymore, and I will let them play outside unchaperoned and I won’t help with homework so frequently. I often think about Jerry Seinfeld’s bit from when his children were very young. “Man, if I knew how much material these guys would have given me, I woulda had kids years ago!…..”  He adds, “this whole bedtime routine….we’re working with three bedtime stories, 2 nightlights, a force field ring of stuffed animals… You know what my bedtime routine was? Darkness.”

The times they are a changin’…..but maybe they should be changing back?….

My daughter told me she doesn’t want to go to college or get married because that would mean she would have to leave our house and live somewhere else one day. The “me” six years ago would have replied, “oh silly, you have to grow up and experience life on your own.” However,  the “me” in that moment felt so excited.  “Well that sounds lovely! Let’s open a horse stable or art studio and you can live here forever.”  We both smiled knowing it wasn’t a reality, but I do sorta wish it was. Who knows? One can dream. (Though ask me in a few years, this tune may have changed ;)

The other day my husband said to me, isn’t it weird that we have three little functioning humans and we are in charge of them? I was so floored at his comment as that same morning I was thinking that same thing.  We have been parents for six years now, but I guess it’s just one of those things that you never get used to no matter how long the days get and how short the years seem. I look at these little people in awe and mostly fear and joy. It truly feels a little like an out of body experience at times. Wait, IIIiii’m in charge here? Just seems off to think these people look to (lost at times) me for answers. And I need to have them.

I asked my Jewish children yesterday what Hanukkah meant to them and my oldest answered, “it’s the holiday before Christmas”….Ugh. Head in hands. Back to the parenting books. We have lots of work to do – and we always will, I know, but I’m not going to let it consume the joys that come along with it.  In terms of success, it’s a sliding scale and an often misguided reflection of achievement. If you can’t enjoy this life as it is here—today–in this moment, what’s the point of it all? What have you achieved? May you all find that ideal, though often shifting, balance of what success is for you and yours.

In the words of cute ‘Jack Dawson’, “Here’s to making it count.”